This is an Army Colt from my collection

Joined Sep 24, 2007
·
1,313 Posts
This is an Army Colt that also came in the collection I acquired. This pistols was owned by an Army doctor, Dr. WD Preston who was assigned to the Philippines in May of 1902. The information was etched on his service pistol.....Probably done by a native artisan with silver inlays on the lettering....some silver still left. 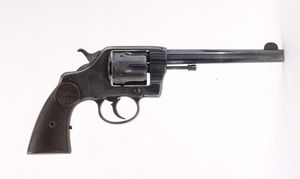 ITWORKEDOUT said:
Is it safe to shoot 357 mag in a gun of that age and can in handle that CUP pressure?
Click to expand...

Actually, you can probably shoot .38 Special in it though I would avoid plus Ps. Of course .38 LC would be better.
The 1901 and 1903 versions had reduced bore diameter for better bore accuracy but Colt (according to Best's book on these revolvers) had concluded that the design was strong enough for S&W's "Special" loading. The larger bore size should actually reduce the effective pressure.
My understanding is that all these guns will chamber a .357 Magnum load: you definitely don't want to fire these. I never tried fitting a .357 round in the cylinders though. The loadings started as black powder but had switched to smokeless in their service life which was essentially 1899 to 1911, though many were still in service for reserves and National Guard and re-issued to active duty non-combat Army and sailors in WWI. Some were still floating around to be given to Britain during WWII as aid and/or lend lease. (Some were actually converted to the British .38-200 (.38 S&W case) round.
The action on these guns is a bit more finicky than the later Colt designs, so major shooting is not really advisable on any of them. The military had a lot of these reworked by Colt and Springfield Armory during their service life.
The Model 1896 is one of the least common of this series revolvers. I think probably only the USMC 1905s are less common, or the USN 1899s. I'm hipshooting from memory here and am too lazy to dig out Best's book to try to find the figures. If I recall, Best could not distinguish any difference between the more common 1894s and the 1896 series revolvers: he speculated there was perhaps a difference in spring strength.
Neat guns in their way. They were shunned by collectors for a long time, and they are still relatively "cheap" for a US military handgun, but they're going up in price.
1 - 8 of 8 Posts