the trigger monstrosity is courtesy of the importer.

Mine has the loveliest bolt/action of my AKM’s.

rurallife said:
SAR-1’s are just about the closest you can get to a commie military manufactured AKM.

the trigger monstrosity is courtesy of the importer.

Mine has the loveliest bolt/action of my AKM’s.

Love to hear that!
R

SAR-2’s are a great AKM74, and now very difficult to find at an affordable price.

rurallife said:
Yours is a 2003, last year of production and arguably the best of the SAR-1’s.

SAR-2’s are a great AKM74, and now very difficult to find at an affordable price.
Click to expand...

Love to hear this more!
I

Joined Jan 1, 1970
·
778 Posts
All the SAR 1, 2 and 3's had trigger slap. I have owned two SAR2's and a SAR3. I regret selling the SAR3 and still have one of the SAR2's. The 3 came with one "converted" East German AK74 mag that refused to work with more than 20 rounds in it. I did buy 3 or 4 Weiger mags and they all worked perfectly. Incidentally, I still have the converted AK74 mag and it still works with 5.45x39 ammo in my other AK74 clones. Mine had a canted gas block. But the sights were straight. Since the rifle still functioned with the gas block as-is, I left it alone.
There used to be instructions on fixing the trigger slap problem that involved removing some metal from the bottom of the disconnector. I tried this but it didn't help. If you fire a full mag from yours and your trigger finger stings or is numb, you've still got trigger slap.
A

Joined Jan 1, 1970
·
7,343 Posts
The top pictured rifle is a kit build from a MarcolMar import of an AIMS PM Md 86 Romanian AK in 5.45x39. The Sar 2 was imported as a neutered example of this model.
The original used the push button side folding buttstock, 22mm threaded front sight block and chambered muzzle device. Lower handguard was the pistol grip type with a bakelite upper gas tube cover., and the later issued green nylon sling vs the early maroon leather type sling.

The bottom rifle is a clone PM Md97 Romanian AK in 5.56x45. This clone was made from a SAR 3 rifle with the original pattern parts added. Similar to the Pm model 86 above it.
This model would have originally had a bulged front trunnion unlike the slab side SAR 3 import.

The SAR1 for domestic Romanian use would have had the side folding push button folding stock and was a PM Md90 that replaced the earlier PM Md63 fixed wooden stock mode and the PM Md65 underfolder model in part.l. The muzzle device would be a slant brake vs the 22mm on the 5.45 and 5.56.

Romania also built the firearms to customer spec for export with variations in stocks and furniture etc. 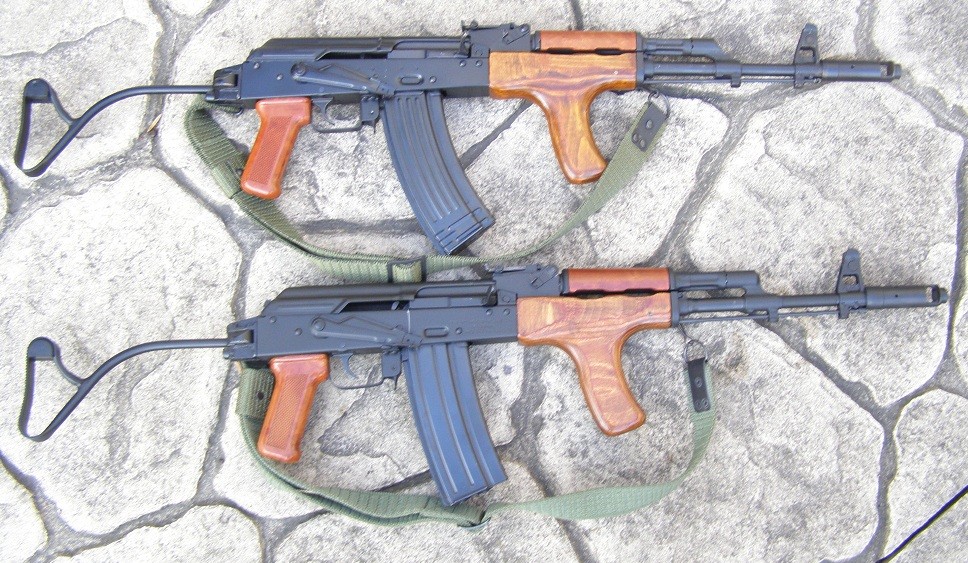 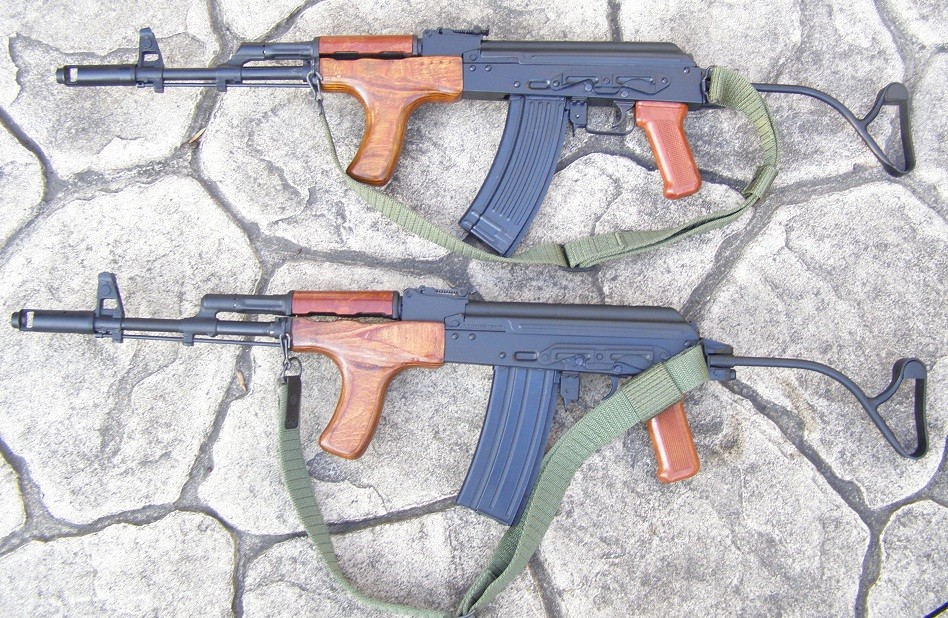 Bob_The_Student said:
Thoughts on this? Any fun facts I should know with this variant?

Its basically a true copy of a Russian AKM. All parts will interchange. The barrel will need to be threaded and the gas block swapped out for a bayonet lug to create a true milspec Kalashnikov
R

Joined Oct 4, 2016
·
253 Posts
There is a wealth of info on the internet about the SAR-1’s. I used to have a link to Martin Koneiga/Adam Konesta (spelling?) that had a detailed pictorial on removing the bottom or back of the trigger (or is it disconnector) Not the usual area everyone keeps mentioning.
F

Joined Jul 3, 2015
·
197 Posts
Anybody who tells you these are junk is full of SHIT, absolutely one of the best rifles that were ever imported, I sold a ton of them at the time, and I regret getting rid of the SAR1 I owned, a bad choice in retrospect.

Its long, and heavy with an EG flash hider on it, and the 45 round mag weighs a ton, but, as stated, if I go to war its one of the ones I'm taking.

Never had issues with trigger slap, and, if memory serves me, we had one that the trigger pins worked out, and it went full auto, sent that one back, because it was just dangerous.

Never really had many issues with canted sights either, and, if you understand AK's and how they are produced, its not that big of a problem, as they generally shoot straight, I just had a friend buy his first AK, and he was amazed at how nothing is square to anything else, gas block, front sights, to the receiver, etc.

I told him he needs to relearn his thinking if he wants to own an AK.
L

Joined Mar 15, 2008
·
1,339 Posts
Guys who Need to sell their ARs or AKs (or paid too much) will have high motivation to make other people feel that their rifles are inferior.

Or they simply want to buy a 'discounted' rifle and resell it for a profit.
V

Joined Oct 14, 2009
·
1,501 Posts
It's a lower tier rifle. I'm Shure it shoots great like an AK. Value is what you can get . I've done a shitload of aks I am not biased. The magwell dimples are a major plus for me. The electro pencil engraving for the markings it's just horrible. The rifles would have been so much nicer if engraved properly

Laufer said:
Guys who Need to sell their ARs or AKs (or paid too much) will have high motivation to make other people feel that their rifles are inferior.
.
Click to expand...

and you be wrong on that, junior. I bought a SAR3 for way under 200 bucks, and the workmanship is crap, does it work? yes, but the workmanship was simply put; crap......these SARs were the scrapings of the bottom of barrel when it came to imported AKs, but since I got it at or below dealer's cost and it was in 5.56 I decided to buy it, just for $hits and giggles and mostly because the 5.56 round would be around forever, might not be so for imported 7.62x39, which would be at the whim of importation laws

the SAR1 and 2 were no better when it came to workmanship.

Guess what? They're going for over 1000 dollars now.
A

Price today is not as much to do with quality in most cases., as it is due to political, social and security issues.

The Romanian and Egyptian AKM firearms are adequate in fit and finish.
Not among the better quality in that regard.

In function they work fine in general.
In terms of being held to a high spec of parts production or assembly, not as much.

Pin installation, component alignment, furniture fitment is not among the better examples.

If open handles enough parts and disassembles enough examples and builds from the kits., the tolerances, uniformity of manufacture are revealed in more detail.

The SAR and Sile Maadi's were generally among the best of the Romanian and Egyptian imports.

Other AK' from countries such as Bulgaria, firmer Yugoslavia, Hungary, Soviet Union held to higher standards.
Particularly before the fall of the communist states in the early 1990's.
They are generally better in fit, finish and adhering to higher tolerances

It happens., they work.

Joined Nov 17, 2007
·
48,494 Posts
I don’t really know...was assuming ..
it was a friends long in his safe I turned his collection..When he passed.
looked better finished wood ..
Really all over..
ones afterwards, I came across..Roughly in new conditions.
its still un fired and I set it up..scoped.

are they dated some where?

Guess what? They're going for over 1000 dollars now.
Click to expand...

I'll agree that the post-89 ban MAADIs, that were imported by INTRAC, PARS, had some of the worst finish on them........looks as if they took a rattle can spray paint and they painted it in a sand storm that is how mine looked when i bought it, but the front sights, gas block and rear sight block was straight. the milling of the bolt and bolt carrier was also very good.

it was so cheap I decided to spend a few extra bucks to have it refinish then bought brand new in wrapper Soviet AKM laminated stock set, also not very expensive at the time, less than 50 bucks from GLOBAL, and made it look a lot nicer then what it was.

now, i had a MISR S/A that were imported by CENTURY ARMS, the milling of the bolt carrier and bolt looked as it was done by a "special needs" shop class, it was terrible with large furrows in the recesses of the carrier. it worked, but geeze Louise you'd would have thought they would have at least finish up the milling instead of leaving it rough like that. there is nothing remotely good to say about the MISR 90......that was just a abortion gone bad, bad, bad

Bought a nice Hungarian 2000M and Dr sported it, so sold the Egyptian.

Sent from my LM-G820 using Tapatalk
A

DK PHILLIPS said:
I own Early one...
Romanian..excellent quality finish
Click to expand...

DK PHILLIPS said:
I don’t really know...was assuming ..
it was a friends long in his safe I turned his collection..When he passed.
looked better finished wood ..
Really all over..
ones afterwards, I came across..Roughly in new conditions.
its still un fired and I set it up..scoped.

Most Romanian AKM's are dated on the front trunnion.
There are exceptions.
Some were manufactured for export and others (kits) were for domestic Romanian military use.
Export type kits also came out of the former Yugoslaia as they were used in that war.

Early Romanian AKM's from the 1960's and 70's are of noticeable higher quality in fit and finish.
This is also true in a number of former commbloc nations manufacturing.

Some changes in using paint vs a smoother and more eye pleasing blued finish.

The SAR series were somewhere in between the quality spectrum from the 60'& 70's to the later WASR series of imports.
21 - 40 of 40 Posts
Join the discussion
Continue with Facebook
Continue with Google
or sign up with email
About this Discussion
39 Replies
15 Participants
Last post:
AKBLUE 2 mo ago
Gunboards Forums
A forum community dedicated to all firearm owners and enthusiasts. Come join the discussion about optics, makes, models, gunsmithing, styles, reviews, accessories, classifieds, and more!
Full Forum Listing
Explore Our Forums
The Collector's Forum - Mosin Nagant HQ The Trader - WTS and WTT listing board Firearms Of The Rising Sun The Lee-Enfield Forum The K98 Mauser Forum
Recommended Communities