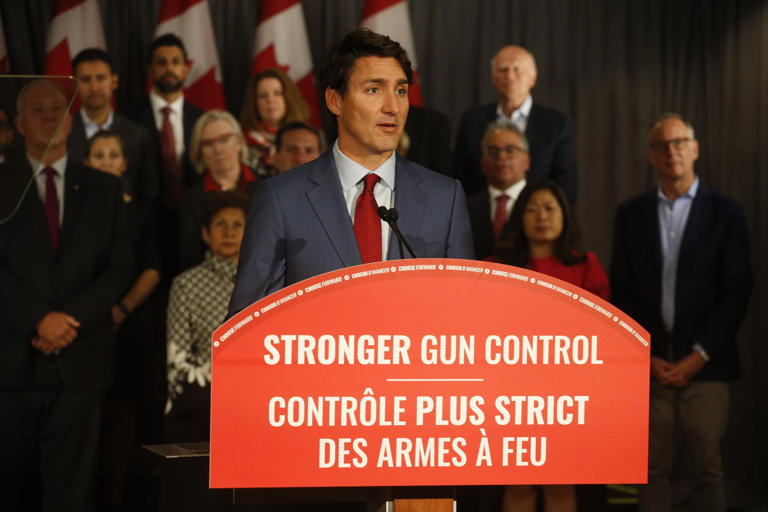 FILE PHOTO: Prime Minister Justin Trudeau in Toronto to walk the Danforth and announce a Stronger Gun Control program at the Don Valley Hotel and Suites on Friday, Sept. 20, 2019.© Provided by Toronto Sun

The Trudeau Liberals aren’t even hiding it anymore, they are coming for hunting rifles and shotguns.
That theory became reality, and fact, on Tuesday when the Liberals unveiled a number of amendments to their gun control legislation known as Bill C-21.
In May 2020, Prime Minister Justin Trudeau announced an immediate ban on what he called “military-style assault weapons.” The Liberals portrayed this as taking “weapons of war” off the streets.
“You don’t need an AR-15 to take down a deer,” Trudeau famously said.
Maybe you don’t and most hunters I know wouldn’t use an AR-15 for deer hunting, but the Remington 742 and rifles like it have been used for deer hunting for decades. That rifle and those like it will now be banned.
One of the Liberal amendments to their own bill, only moved for vote after all witnesses have been heard from and testimony concluded, will ban hundreds more models of rifles and shotguns. The amendment states any centrefire rifle or shotgun that can hold a magazine that can hold more than five cartridges will be prohibited.


For these rifles and shotguns, using a magazine that can hold more than five cartridges – what most people call bullets or shells – is already illegal.
“The Liberal government with this amendment is moving to ban almost all semi-automatic rifles and shotguns,” Conservative MP Raquel Dancho said at the committee where the motion was moved. “We’re talking bird hunters.”
Liberal MP Paul Chiang moved the motion and cited his years of experience as a police officer to explain why the amendment was necessary. His claim was rebuffed by Conservative MP Glen Motz who spent 35 years as a police officer.
“This is not an amendment that will do anything for public safety,” Motz said.
The amendment fundamentally changes the bill and the Conservative side tried to have it ruled out of order for changing the scope of the bill but were overruled by committee chair Ron McKinnon, a Liberal MP.


The changes in the amendment make it very different from the bill that was sold to the public, one that was focused on dangerous weapons used in American mass shootings – now it’s about hunting rifles and shotguns.
The changes will potentially add $1 billion or more to the cost of the buyback that is attached to the legislation. You can’t ban millions of additional firearms, including some of the most widely-held guns in Canada, without driving up the already exorbitant cost.
The buy back, as the government calls it, was already estimated to cost more than $1 billion and climbing. The total cost is now likely over $2 billion and it won’t make the streets any safer.

Toronto alone has seen 351 shootings so far this year with 138 people injured in those shootings and 41 people killed. These changes, in fact, all of Bill C-21, won’t do a thing to stop the shootings that are plaguing cities across Canada – these criminals aren’t using the guns Trudeau is banning.
This move could be flippantly described as political theatre aimed at convincing voters that the government is doing something. The problem is this move is more insidious than that alone.
It is also an all-out attack on Canada’s hunting and shooting history.
Trudeau is going after hunters because they are easier targets than the repeat criminals he’s lowering jail sentences on.
[email protected]